We're turning 20 - and we're celebrating our birthday! Win an item of gear every month in our online 20th Anniversary Sweepstakes, plus a chance at a new kayak -- a custom Atlantis Titan VI. Click here and read the latest issue of Wavelength online for details.

Win this gorgeous custom kayak! Wavelength Magazine is proud to offer our online readers a chance to win this custom kevlar Atlantis Titan VI, complete
with a custom cleargoat gel and two-tone fade paint scheme on the deck -- a $4,500 value. Visit page 28 of our Spring 2011 issue for details.

Find your perfect kayak here Browse through hundreds of models of kayaks in our new and improved Kayak Buyer's Guide. You'll find everything from kits to inflatables to triples. Click to visit.

We've changed our name! Let us know what you think of our choice of Coast&Kayak Magazine. You can also give feedback on any of our articles instantly. Click here for more.

Discover the new BC Marine Trail! Get the exclusive details on the newest and largest marine trail in the world as Coast&Kayak takes you along the British Columbia coast.

Fill out our 2011 readership survey

Every entry qualifies to win the Atlantis Titan VI.

Fill out the survey.

Download a PDF for offline reading or use on a handheld device including iPods. 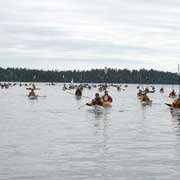 About 100 kayakers converged en masse in an even't dubbed 'floatzilla' to mark the official opening of the BC Marine Trail on Saturday, May 14. The kayakers paddled across Ladysmith Harbour to the marine trail grand opening timed to take place during the 2011 Vancouver Island Paddlefest. The paddlers were met at Transfer Beach by Stz'uminus First Nation Chief John Elliot, who as part of the ceremony was asked by kayakers for permission to land on Stz'uminus traditional land. Once granted, kayakers performed a paddle 'salute' followed by a synchronized Greenland roll.